Happ’nen, Today (HDD) – This just in! Easter Monday at the White House will be a BIG event! This year, 30,000 people will participate in the 136th annual White House Easter Egg Roll, an American tradition since 1878! You can check out all the festivities here via live streaming. 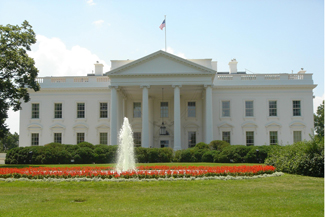 The President of the United States lives here.

What color is your house? Would you like to go to an Easter Egg Roll?

The President of the United States of America lives and works in a white house appropriately called the White House. The White House is located at 1600 Pennsylvania Avenue in Washington, D. C.

Sometimes, you can tour parts of the White House. The White House has a lot of rooms with many colors, shapes and directions! There is a Green Room, a Blue Room and a Red Room, and there is also an East Room for example! The President works in the Oval Office, but it is not on the tour. After all, we wouldn’t want to bother the President at work! The White house even has a West Wing and an East Wing. Does your house have wings? What color is your room? If you took people on a tour of your house, what would you show them?

Heckery Dekkery Dot Travel Game Postcards for Children can be sent as you would send any travel postcard, but there is more when you play the game . . . . Heckery Dekkery Dot Travel Game Postcards for Children is a unique travel game which enables all players to learn more about the world around them, but it is first and foremost a children's learning game in which children not only become acquainted with other parts of the world, but also gain respect for other cultures in a fun and easygoing, carefree manner. It is Heckery Dekkery Dot's goal to help children learn about the city featured on the travel game postcard and the people who live there by providing them with an educational as well as a fun website. All photos on this blog were taken by me on my travels unless otherwise indicated.
View all posts by If you were here, →
This entry was posted in #Children, #Curiosity, #Education, #Family, #Fun, #Postcards, #Travel, #travel #game, #Washington, Easter and tagged #children, #discover, #Easter, #Education, #family, #Friends, #grandparents, #parents, #photo #postcards, #Play the #Travel #Game, #Teachers, #Tourists, #Travel. Bookmark the permalink.