Who is Walking around Up There with Their Heads in the Clouds? Heckery Dekkery Dot Travel Game Postcards for Children wants you to know….. 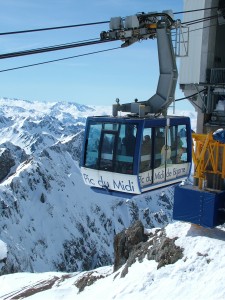 WOW!  The view from the top of the Pic du Midi is breathtaking, and you can see just about “forever”!   It’s not so easy to hike to the top, but you also can get there by cable car!  There is a museum where you can see observation instruments which illustrate a century of scientific research, and there is also an observatory where scientists study the earth’s atmosphere, ozone layer, climate, and more!  They are not just walking around up there with their heads in the clouds!

Did you know that the Bernard Lyot Telescope, which is the Pic du Midi’s most important telescope, is famous for being the first instrument in the world to be dedicated to the study of the stars’ magnetism?

Of course, it should not come as any surprise that skiing is quite popular on the Pic du Midi!  They get a lot of snow!  In fact, some peeks in the central Pyrénées are permanently snowcapped, and there are many glacial formations!

Skiing, throwing snowballs, look out below
http://www.ifuwerehere.com/to_the_sites/france/31t7qx_pic_du_midi.html! We could have lots of fun if you were here!

Help SOMEONE you know learn more
about the world around them!

Because everyone WINS when that happens!

Heckery Dekkery Dot will send this postcard on its way
to help YOU get the travel game underway!

Everyone wins when children learn more about the world around them!

Heckery Dekkery Dot Travel Game Postcards for Children can be sent as you would send any travel postcard, but there is more when you play the game . . . . Heckery Dekkery Dot Travel Game Postcards for Children is a unique travel game which enables all players to learn more about the world around them, but it is first and foremost a children's learning game in which children not only become acquainted with other parts of the world, but also gain respect for other cultures in a fun and easygoing, carefree manner. It is Heckery Dekkery Dot's goal to help children learn about the city featured on the travel game postcard and the people who live there by providing them with an educational as well as a fun website. All photos on this blog were taken by me on my travels unless otherwise indicated.
View all posts by If you were here, →
This entry was posted in #Children, #Education, #Grandparents, #Parents, #Pic du #Midi, #Postcards, #Relatives, #Travel, #travel #game, #Travel #Postcards and tagged #children, #Education, #family, #fun, #german #language, #grandparents, #parents, #postcards, #real #postcards, #snail #mail, #Travel, #travel #game, #Vacation. Bookmark the permalink.