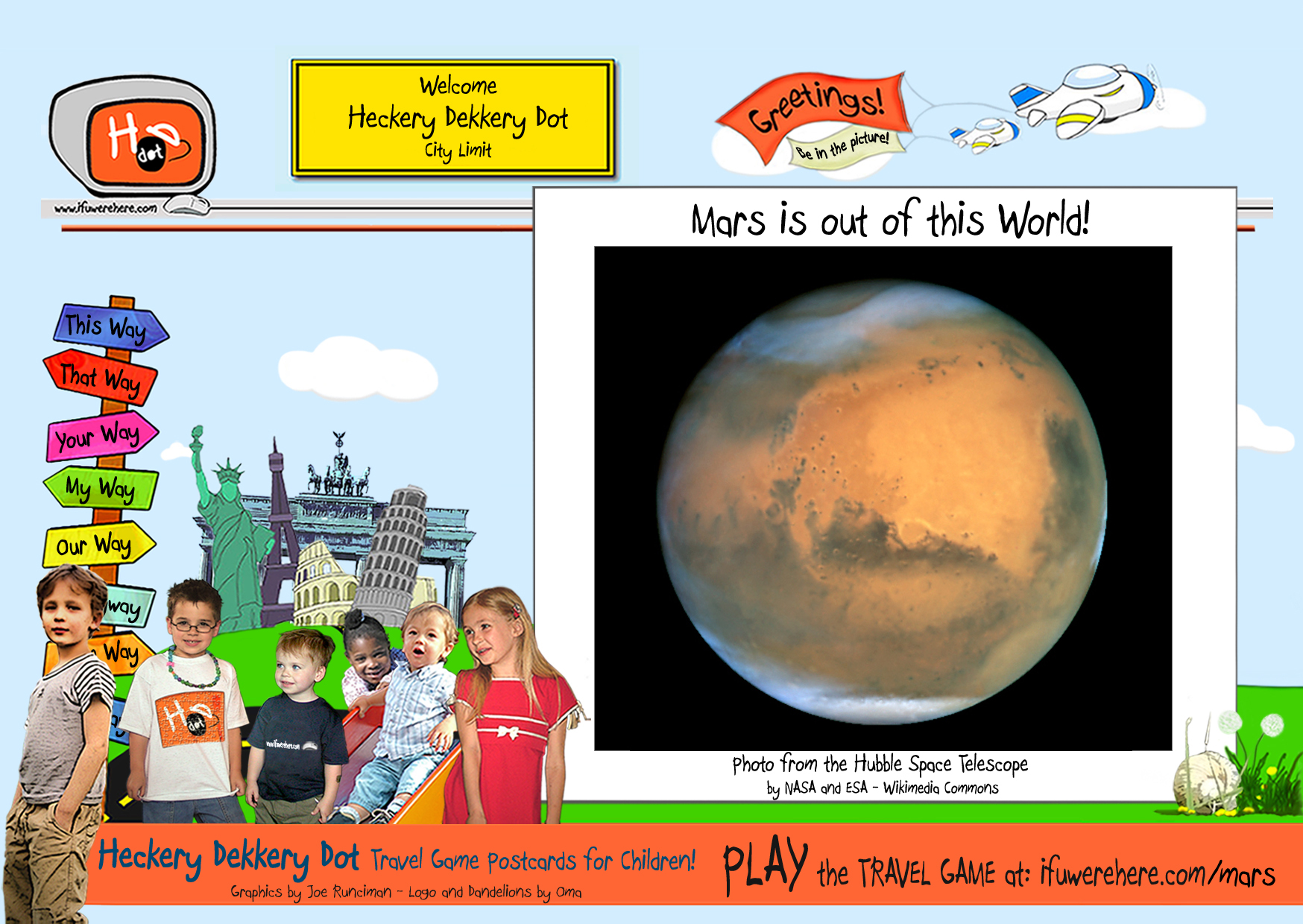 Passé?  No Way!
In fact Heckery Dekkery Dot Travel Game Postcards for Children predicts that you will one day receive a travel gamecard postcard from Mars!

Mars is the fourth planet from the sun, and the second smallest planet in the solar system.  Like all planets in the solar system, Mars travels around, or orbits, the Sun.  It is Earth’s outer neighbor and is visible with the naked eye.  Mars is called the Red Planet because it often looks very reddish and bright in the sky.  Mars was first mentioned in records of the Babylonians about 3,000 years ago, and Mars was named after their Roman god of war.

It was believed that there could be life on Mars, but the space missions of the 1960’s and 70’s have dispelled that.  To date, no man-like forms, no animals or plant life have been found.  Moreover, many scientists think that if any life-form exists on Mars today, it could only consist of tiny organisms in protected areas just below the surface. However, due to the presence of water on the planet, scientists believe it is possible that life did exist on Mars at one time, and so the search for evidence of life on Mars continues!  In fact, the next Mars rover, Curiosity, should land on the planet on August 6, 2012.

Curiosity’s mission is to determine whether humans could survive on Mars, and to search for signs of previous life.  Curiosity has currently completed half of its journey.  If you are curious, you can follow Curiosity’s progress here.  Explore NASA’s Eyes on the Solar System 3-D interactive.  FAR OUT!

Finally, would you like to travel to Mars? If so, be sure to take your heavy coat and maybe even an extra sweater with you because they say it is really cold on Mars!  Remember to send a postcard to your friends and family back on Earth if you go, too!  What kind of postal service do you think would work best between Mars and Earth?  Airmail?  Rocketship?  Interplanetary Mail?  Hmmmm . . . Maybe, Out-of-this-World Express Mail!  What do you think?

Read lots more about Mars here!  Younger readers may like this!

Heckery Dekkery Dot Travel Game Postcards for Children can be sent as you would send any travel postcard, but there is more when you play the game . . . . Heckery Dekkery Dot Travel Game Postcards for Children is a unique travel game which enables all players to learn more about the world around them, but it is first and foremost a children's learning game in which children not only become acquainted with other parts of the world, but also gain respect for other cultures in a fun and easygoing, carefree manner. It is Heckery Dekkery Dot's goal to help children learn about the city featured on the travel game postcard and the people who live there by providing them with an educational as well as a fun website. All photos on this blog were taken by me on my travels unless otherwise indicated.
View all posts by If you were here, →
This entry was posted in #Children, #Education, #Family, #Fun, #Mars, #Postcards, #Travel, #travel #game, #Travel #Postcards, #Vacation and tagged #children, #Education, #family, #fun, #grandparents, #parents, #postcards, #real #postcards, #snail #mail, #Travel, #travel #game, #Vacation. Bookmark the permalink.